These shows will feature new original music by Miguel as well as exploring new takes on the music of Madlib and J Dilla among others.

in addition to the presale tickets, there will be approximately thirty $25 tickets available the night of at the venue

Miguel Atwood-Ferguson is a very unique and special force in today’s world of music. Having recorded on close to 400 albums already by the age of 34, he effortlessly bridges diverse genres and generations of musical and cultural elements into cohesive and magical presentations.

One of Miguel’s greatest achievements to date was in 2009 when he composed and conducted the historic ‘Suite for Ma Dukes’ concert in LA leading over 60 musicians in tribute to the transcendent modern Hip-Hop producer J Dilla.

Having diligently studied classically since the age of four and being exposed to cultures and art from all around the world, Miguel is now able to enjoy a very diverse career collaborating with many amazing artists. Miguel has had the great fortune to perform or record with giants such as Ray Charles, Stevie Wonder, Quincy Jones, Henry Mancini, Esa-Pekka Salonen, Wayne Shorter, Billy Higgins, Ray Brown, Brad Mehldau, Flying Lotus, Hubert Laws, Seu Jorge, Dr. Dre, Will.i.am, Madlib, and many others.

In 2011, Miguel had the honor of providing Oprah Winfrey with a one man orchestra of himself as the music behind the main promo of her new TV Network ‘OWN’ courtesy of Miguel’s intro to his duet with Will.i.am off of the Black Eyed Peas 2010 album ‘The Beginning’. Miguel has plans to release his very first album in 2016 on the Los Angeles indie label ‘Brainfeeder.’

“so far, in addition to those mentioned on the poster, i have planned to perform music by john coltrane, joão bosco, hermeto pascoal, the jackson 5, wayne shorter, woody shaw, tupac, lauryn hill, and bel biv devoe! different music each night!” –MAF

Soul music is timeless, but if there was one decade when it defined the times that would be the seventies. The style was born in the mid-sixties at a time when its creators were struggling to establish their place in American society. Sam Cooke, Lou Rawls, Solomon Burke, Curtis, Otis, Smokey, Marvin, James, Sly and Bobby Womack among countless others, sketched out a blueprint for a new, modern Black music that would soon sweep the nation from Harlem’s 125th street to rural Virginia’s Tobacco Road and as far as Watt’s 103rd street. Ironically, it took some Brits and Bob Dylan’s endorsement to hip whitestream America to what they were missing out on in their own blackyard. As the sixties turned into the seventies, and all but the Panthers deferred their dreams of racial revolution, soul music matured and flourished as if all the hopes, dreams, anger and disappointment of a generation of young Blacks found expression in the music of Stevie, Curtis, Marvin and Minnie.

We almost lost Detroit, but from this and many other cities’ ashes emerged a beautiful and bold music – a more personal, and therefore universal, expression – that evolved into one of the most dominant culture expressions of the decade. By the dawn of the seventies, soul music was mainstreaming with the crossover success of artists like Stevie Wonder, Bill Withers, Marvin Gaye, Isaac Hayes, Minnie Riperton, Al Green and Michael Jackson. Just about everyone was getting in on the new trend of socially conscious lyrics, fatback drums and stop-on-a-dime horn sections. The popular and critical response to this music blew open the doors for a whole family of styles. Soul music was appropriated and incorporated into just about every other genre imaginable: soul-jazz, soul-rock, psychedelic soul, latin soul, and blue-eyed soul are just a few of the more popular hybrids.

And then there’s Funk. Like Metal is to Rock ‘n Roll, Funk is an extreme manifestation of Soul music that emerged in the late sixties and early seventies from the bold rhythmic experiments of Soul music’s pioneers like James, Sly, Curtis & Stevie. Soul music was the foundation and Funk was the attitude, the secret spice to get the people moving and it was applied liberally to songs by new and established artists alike. Some musicians, like Parliament-Funkadelic founder George Clinton, started their careers in the sixties singing Soul, but after Sly and James took their music to faster, funkier and blacker places, they followed headlong into uncharted funkmospheres, further expanding the sonic, social and sexual boundaries of Soul music. Herbie and his Headhunters, Donald Byrd, Roy Ayers to name but a few respected jazz musicians were helpless against this powerful new sound, giving us jazz-funk.

Sadly, America’s soul obsession wouldn’t last forever. Like a salesperson that didn’t understand its product or consumer, the music industry forced the soul into extinction by forcing it into platform boogie shoes and a rigid 4-4 dance beat. Some survived, but most artists’ careers tanked or they were forced to radically change their game. Forty years later, soul music is more popular than it’s been for decades with new talent and audiences gravitating to its sincere sentiment, heartfelt harmonies, and bad-ass beats.

ArtDontSleep will bring over two dozen timeless tunes and hi-fi highlights from 1970-1979 to life for one night only with That 70s Soul featuring Seu Jorge, Zap Mama, Alice Russell, Spacek, Coco O. (Quadron) and others. An all-star cast of musicians, including legends Ndugu Chancler and Derf Reklaw along with future legend Kamasi Washington, lead by multi-instrumentalist and arranger/composer Miguel Atwood-Ferguson, will breathe new life into these seventies soul masterpieces. These are many of the same creative and fearless musicians and promoters that brought you the recent East Side Story Show as well as the 2009 Timeless series featuring the music of J. Dilla, Mulatu Astake and Arthur Verocai.

On this special night some of the under-sung musical heroes that are still alive and with us today, like Leon Ware, James Gadson and others be honored through their music and presence.

Leon Ware is best known for the songs he’s written, Marvin Gaye’s “I Want You”, Quincy Jones or Average White Band’s “If I Ever Lose This Heaven” or Minnie Riperton’s “Inside My Love”, though he has no fewer than ten albums recorded under his own name for Motown, Elektra and most recently for the revived Stax record label. His sophisticated and sensual style of soul helped to define the influential quiet storm style.

James Gadson is a living legend behind a drum kit. He’s played behind everyone from Bill Withers and Charles Wright and the 103rd Street Band to Justin Timberlake and Norah Jones, with Marvin Gaye, Aretha Franklin and countless others along the way. Far from a one-trick pony, he’s also written, produced and sang on hundreds of records from the Doo-Wop era to the present day. 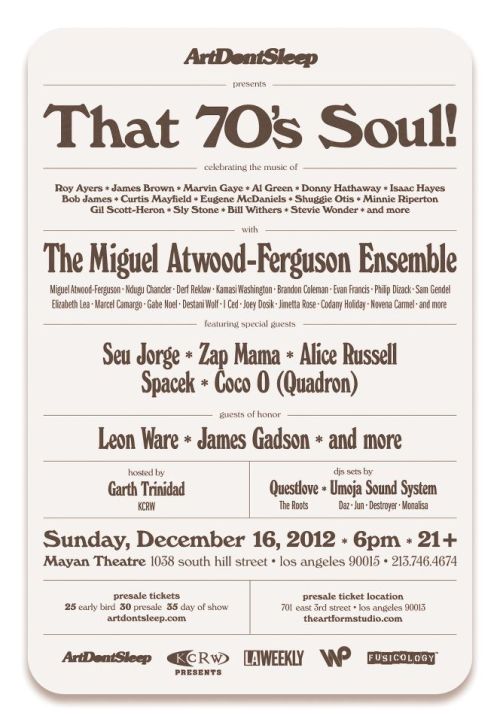