JAZZ IS DEAD is back Los Angeles!

On Valentines Eve, One ticket gets you into two incredible shows: Jazz is Dead upstairs at The Echo & The Return of 70’s Ethiopian Funk God, Ayalew Mesfin w/ Debo Band  downstairs at The Echoplex • Will be one for the books! •
The love is real, Los Angeles ❤

The Return of Ayalew Mesfin, The 70’s Ethiopian Funk God!

With opening performances by:
Wondem and Ethio Cali

From the album Hasabe (My Worries), a Now-Again x Vinyl Me, Please release, coming January 23. Ayalew Mesfin is among the legends of a 1970s Ethiopian funk era whose music was forced underground by his country’s government. Now, over 40 years later, his triumphant return gives us a chance to discover a rare & beautiful moment in music history.

We’ve been working really hard on this and we are excited to be presenting it to you.
If you purchase entry into one of the events, you will be granted entry into both events. This is a very special one time happening and only going down in Los Angeles!

Hosted by: The Hawthorne Headhunters 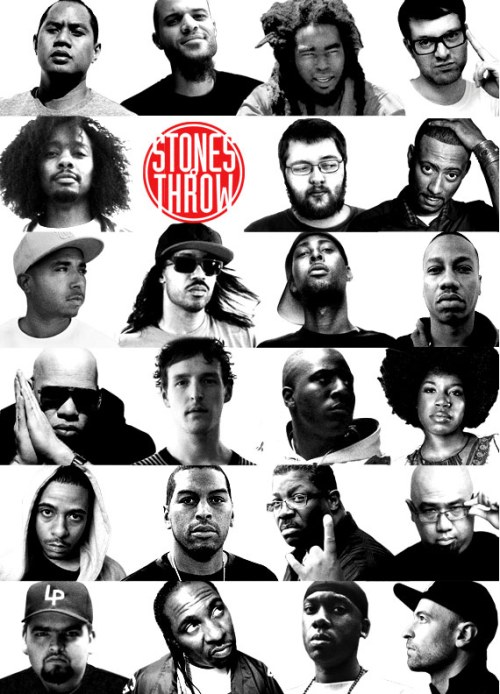 diggin up some smooth lyrical gems.

i first heard this about 12years ago. i got it on a blank mix tape. i memorized the lyrics but lost the tape (hopefully it found it’s way into another lucky tape deck). imaginary friends by Emanon (Exile and Aloe Blacc) is a fantastic album with a sound marking a particular era of jazzy melodic hiphop. for years i had no clue who it was, i’ve ran into Exile and Aloe several times since these tracks first graced my ears and have made it a point to rant and rave about how fresh these tracks are, take a listen…

and on and on… 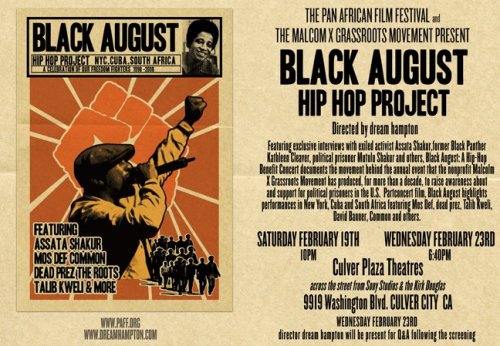 Hip-hop cultural critic–turned-filmmaker Dream Hampton‘s Black August (U.S.) is an engrossing critique of the creation and incarceration of America’s political prisoners (in this case, African-American political activists). The film is deft and fast-moving, and Hampton shrewdly introduces the subject by having Dave Chappelle function as a kind of clueless Everyman, explaining the historical meaning and connotations of the term “Black August” by first admitting he only recently heard the term, before breaking down its significance: Black Panther George Jackson was murdered by San Quentin prison guards in August 1971, kicking off a lineage of African-American political tragedies that would occur over the years in the month of August. With crisply shot concert footage from the annual consciousness-raising, New York–based Black August Hip-Hop Festival (performers include Mos Def, Common, Talib Kweli and Dead Prez) juxtaposed against interviews with political exiles Nehanda Abiodun and Assata Shakur, the documentary is the perfect blend of sleek professionalism and gritty substance.

FLAVORS (Recapping The Music Of The 90’s Era…The Golden Years), is an event conceptualized by the innovative minds of KeiStar Productions.  The first installment of FLAVORS dates back to 2002 and was celebrated with none other than the incomparable DJ SPINNA.  With his extensive record collection and music knowledge DJ SPINNA creates havoc on the dance floor by spinning the unforgotten hits of 90’s Hip Hop, R&B, Dancehall and House Music with a seamless thematic mix.
KeiStar Productions & DJ SPINNA went on to conquer the New York City club scene with FLAVORS and have invited guest DJ’s such as QOOL Marv, Rich Medina and DJ Scratch (of EPMD) to accompany them.

DJ Spinna is something of an anomaly in music. A humbling example of what it takes to truly succeed within the framework of multiple fields. A steadfast work ethic, an obsessively extensive vinyl library and the willingness to pursue the full extents of his roots (Funk, Soul and Jazz), foundation (Hip-Hop) and future (Electronic/Dance music) with no restraints.
Regarded as one of the most versatile and talented producers/remixers/DJs in today’s musical arena. he has produced numerous tracks and remixes for notable artists such as Michael Jackson, De La Soul, Mary J. Blige, Mos Def, Eminem, George Michael & Stevie Wonder.

Also performing/working along side Spike Lee, Q-Tip, Stevie Wonder and many other world talents.

One of the original turntablists, J. Rocc founded the Beat Junkies in 1992 with Melo-D and Rhettmatic, but has done just as much on his own as in a group setting. He began DJing in the mid-’80s with a California group named PSK. Soon after forming, the Beat Junkies became a seminal force in the rise of instrumental hip-hop, including core member Babu plus future stars Shortkut and D-Styles.

In addition to numerous mixtapes and his own production for Stones Throw releases, J. Rocc has been the DJ for Madlib’s live shows since the early 2000’s, was the 3rd member of Jaylib (Madlib & J Dilla) during the group’s live events, and collaborated with Madlib on Beat Konducta Vol. 5-6: A Tribute to J Dilla.

J. Rocc is currently working on a solo album for Stones Throw.

During the early nineties Daz was invited by DJ Marques Wyatt to spin the opening set at the now the legendary weekly acid jazz club Brass.
The grooves at BRASS were universal and the streets were watchin’. Jamiroquai, Digable Planets, The Brand New Heavies, The Roots, The Pharcyde, Big L, Guru’s Jazzmatazz and many others did their first shows in Los Angeles and on the west coast via BRASS promotions as the Brass DJ’s could be seen holdin’ it down on the turntables with blazin’ DJ sets. Daz then went on to spin parties for Sade, Rage Against The Machine, Macy Gray, Lenny Kravitz, Ghostface Killah, and the Coachella arts and music festival among others.
Never one to fall short of his endeavors, and always through his love of music DJ Daz moved on to become a resident DJ for Chocolate Bar, one of Los Angeles’ longest running true school hip hop clubs. Chocolate Bar garnered rave reviews in local and national publications as the place to be; a virtual melting pot of local people and artists to watch out for.
Jill Scott, Mos Def, and Slum Village all did impromptu sets at Chocolate Bar. And celebrities. Zach De La Rocha (Rage Against The Machine), Vince Vaughn, and even Ellen Degeneres were seen rubbing elbows at Chocolate Bar with Hip Hop fans and music lovers.

To say ‘Hamdulillah’ is to be grateful for what one has.

The images of the past decades have cast a veil on our identity as a people. We, as international brothers and sisters, are now witness to injustice in real time. We watch our Wars in HD. Injustice is played in real time.

It is time for us to claim our faces back.

This video is a global collaborative effort by 10 photographers- from London to Lebanon, Cairo To Canada, Abu Dhabi to America- to create a portrait of the New Global Citizens. They are DJs, MCs, poets, architects, teachers, doctors, parents and children. Most of all they are people.

Thank you to everyone that was involved. We are blessed to have each other. 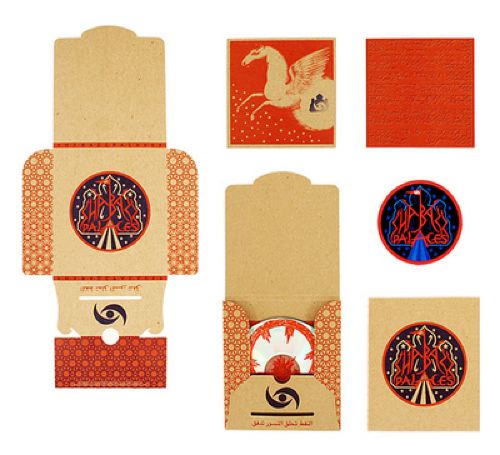 The exhibit will be open to the public Sat 1/30-2/6 Exclusive images from the making of the “Ecstatic” to tour photos & more.

A preview of Patrick Martinez’s solo show “You Don’t Have To Lie To Kick It” opening Sept. 10 2009 @ Fifty24LA Gallery / Upper Playground in downtown Los Angeles.

Patrick Martinez: You Don’t Have To Lie To Kick It” Preview Video on Vimeo.

this cat// with impeccable rhymes and samples// placement held with mathematical precision// futuristic // fortune telling// historian// like a map writer// smooth samurai song// a guide// simply amazing// on heavy rotation// from dilla to an eternal sunshine// he was born ready!
-LaMujerIv (wyldflwr)