RSVP for his FREE album released party presented by RBMA.

Red Bull Music Academy presents:
THE GASLAMP KILLER AND FRIENDS
At The Mayan 9.18 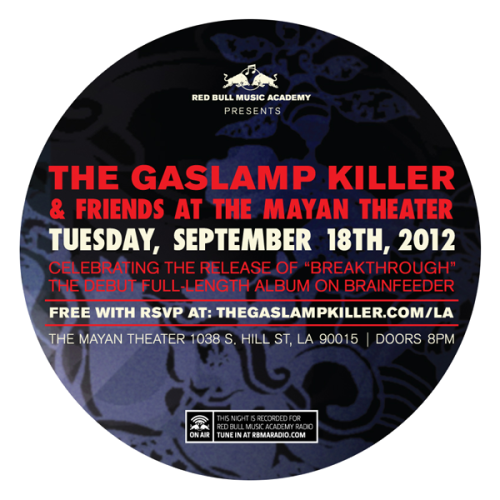 Breakthrough is the debut full-length album from the Gaslamp Killer, a manic and mystic trip through the mind of a madman. Resident DJ and co-founder of the mythic Low End Theory club night in Los Angeles, the Gaslamp Killer is known across the globe for his impeccable turntable skills and high-energy performances. He delivers the same fire to Breakthrough, a project pulled from within his soul that is his strongest musical statement yet.

The Red Bull Music Academy is a world-travelling series of music workshops and festivals: a platform for those who make a difference in today’s musical landscape. The Academy began back in 1998, and has been traversing the globe since: from Berlin to Cape Town, São Paulo, Barcelona, London, Toronto and many other places. The upcoming edition of the Red Bull Music Academy is set to take place in New York City from April 28 through May 31, 2013. For more information, please visit www.redbullmusicacademy.com.